Gladiators on the ice.

The KEC is simply a cult club and has been consistently represented in the top ice hockey league since 1973.

Düsseldorf and Cologne are rivals on the Rhine – these matches are already full of excitement and action. If you stage the whole thing as a Winter Games in the RheinStadion with 42,500 seats, a completely different potential comes to light. Although the fans from Cologne and Düsseldorf mobilise for the Rhein-Derbys again and again, the range of the usual advertising campaign had to be blown up for the big match in January. For comparison: The Lanxess Arena, home game location of the Cologne sharks, only accommodates about 19,000 guests during the games.

We developed the motto “gloria victoria sit” and built the entire campaign as a gladiator fight. We have slaughtered the theme to the blood. In the historical theme there was a suitable shooting in the Roman-Germanic Museum with Alexander Barta from DEG and Moritz Müller from KEC. 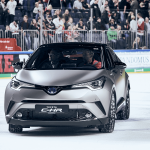